The Horizon 2020 Project EuPRAXIA has just passed the halfway mark. The consortium led by DESY is preparing a conceptual design report of a highly compact and cost-effective European facility with multi-GeV electron beams using plasma as the acceleration medium. The accelerator facility will be based on a laser and/or a beam driven plasma acceleration approach and will be used for photon science, high-energy physics detector tests, and other applications such as compact X-ray sources.

The EuPRAXIA consortium has held its second Yearly Meeting and Collaboration Week from 20th to 24th November 2017 at the Instituto Superior Técnico in Lisbon. All partners gathered to discuss the status of each of the work packages and of the project as a whole. The Collaboration Board of EuPRAXIA approved the incorporation of Queen’s University Belfast (UK) and the Ferdinand-Braun-Institute of Berlin (Germany) as associated partners. With these new additions, the number of partners in EuPRAXIA now rises to 40.

The event in Lisbon was also the occasion for the first meeting of EuPRAXIA’s Scientific Advisory Committee (SAC). The SAC, composed of eight international experts in laser and accelerator science, was in charge of assessing the status of the project and providing a set of recommendations.

The Scientific Advisory Committee of EuPRAXIA presenting its conclusions in Lisbon (Image: EuPRAXIA)

Coordinator Ralph Assmann and the principal researchers of EuPRAXIA gave a summary of the status of the project and their respective work packages.

Current research within the consortium aims to improve the beam quality and to demonstrate the benefit of size and cost of a plasma accelerator versus established radio frequency (RF) technology.

Beam quality is essential in order to show that plasma accelerator technology is usable. In EuPRAXIA, two approaches are being used to address the beam quality. The first is to improve the technical components and plasma accelerator schemes already producing GeV class beams; this includes improved laser technology and feedback loops. The second is to start with a high-quality beam from a small RF injector and boost it to high energy. The latter approach is fully stageable, offering a path to high energy while the starting beam quality is assured. However, it brings out new issues, like sub-femtosecond beam synchronization, for which new solutions are needed and new ideas are being implemented.

The project has identified nine different technical scenarios to achieve the target performance of the EuPRAXIA facility, defining the baseline parameters for the operation of lasers, RF injectors, and plasma accelerators. Several partners are assessing the viability of the different schemes through advanced start-to-end simulations and experiments at various European facilities.

The consortium has also made significant progress in developing the applications where a plasma-based accelerator would have a large impact, namely as a driver for a Free Electron Laser and as a test bed for high-energy physics detectors.

EuPRAXIA is now ready to take on the second iteration of its general layout and start evaluating the cost construction and operation of the facility. The proposed solutions must offer significant benefits with respect to RF-based accelerators, e.g. fitting constrained spaces and being cost-effective, including having lower operational costs.

The design study is site independent, although five possible sites have been discussed. The construction of EuPRAXIA will be decided after 2019, and its location will be based on the facilities and expertise available at all the supporting laboratories. Even though the facility would be built in one central site, all the project partners would commission parts at their local facilities.

The final conceptual design report, which will include a detail implementation model, will be submitted in October 2019 and if construction is approved it could start operations as soon as 2025.

Although there are still major challenges ahead, the progress made in the first half of the project gives us the confidence to look forward to the delivery of an excellent Conceptual Design Report for a highly compact and cost-effective plasma accelerator facility with industrial beam quality. 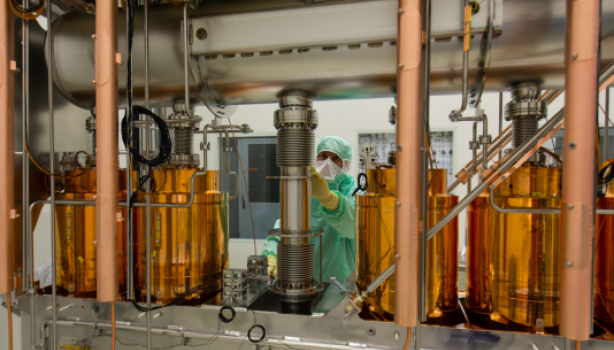 HIE-ISOLDE advances the high energy frontier of the facility.