The long-term benefits of research infrastructures (RIs) to society at large are unquestionable. RIs, from large facilities such as the Large Hadron Collider (LHC) at CERN to data networks, play a vital role in answering fundamental scientific questions, tackle societal challenges and boost innovation. The new ways of working within scientific research lead to new forms of collaboration across disciplines and national borders, gathering different actors like researchers, scholars, educators, students from academia as well as public and private research organisations and innovating firms. Moreover, as they become larger and more complex, these infrastructures typically comprise high-cost investments while a strong growth in the number of RIs that are operational or planned across Europe has recently been noticed. Therefore, it is important to provide a framework for assessing their impact and maximise the potential benefits in terms of use, access and knowledge sharing.

In this context, in January, the kick-off meeting of the H2020 policy support project “RI-PATHS: Research Infrastructure imPact Assessment paTHways”, took place in Brussels. The main goal of the project is to develop a consistent, empirically implementable and holistic model at international level for analysing the socio-economic impact of research infrastructures and their related financial investments.

At the moment there is no unified model for the socio-economic impact assessment (IA) of investment in RIs. Various conceptual frameworks exist in parallel, comprising a range of observable direct and indirect effects and longer-term economic impacts. The aim of “RI-PATHS” is to formulate a comprehensive approach to IA of RI based on a solid theoretical model that takes into account the diverse types for RIs, distinct phases of RI lifecycle and needs of various stakeholder groups. The ambition is to devise a conceptual model that not only traces causal chains in relevant impact areas, but also reflects the interrelations and complementarities between various impact pathways resulting in a systemic view on impact of RIs.

Alasdair Reid, Project Coordinator of RI Impact Pathways, says: “the project aims to develop an operational model and a toolkit to help research infrastructure managers, funders and decision makers to understand the full range of benefits that can occur from investment in RIs.”

Massimo Florio, Professor at the University of Milan, stated that: “the key word in this call is ‘a model’. For a model, we need to have a theory. We need to experiment to go beyond the existing system of knowledge. The aim of RI-PATHS project is to frame such an experiment to build a theory and establish a model for IA of RI.”

To achieve this goal, the RI-PATHS project Consortium will opt for a modular approach that allows better integrating the different aspects of all major types of research infrastructures. The IA model will be designed in consecutive stages in a participatory co-design manner. Extensive consultations and participatory workshops are planned with the research community, policy makers and funding agencies to make explicit their assumptions and forge a shared understanding on the main impact pathways of investment in RIs. Moreover, the RI-PATHS project will work in close partnership and take into account the work of the OECD Global Science Forum Expert Group on Socio-Economic Impact Assessment of RIs, as well as the results from the ongoing Cost Benefit Analysis (CBA) study, led by Professor Massimo Florio (UNIMI), of the LHC, HL-LHC and FCC projects.

In addition to the conceptual model, the RI-PATHS project will develop a tailored set of impact indicators contributing to the refinement of a concrete toolbox for policy making. Through testing the applicability of the logical model and piloting concrete data gathering efforts with partner RIs, the project aims to enhance the operationalisation of the model.

During the kick-off meeting in Brussels, participants from major research organisations including ALBA, CERN, CSIL, DESY, EMBL, EFIS Centre, ESF and Fraunhofer discussed the key challenges of measuring the impact of RIs. Among the key considerations were the quality and timespan of the available data, the required resources for a comprehensive impact assessment and the level of support from the funding agencies. The Consortium concluded that the IA model needs to be accompanied by tailored and well-designed quantitative indicators that are qualitatively well-embedded.

Keji Alex Adumnom,  Project Officer from the European Commission, stressed that: “It has never been the purpose to use the model for investment decisions. The purpose is also not to design any benchmark tool for RIs. The purpose is to provide a narrative on impact. It has to be both qualitative and quantitative.”

CERN participates in RI Impact Pathways, through the FCC study for a post-LHC particle collider, an interesting case study that builds on CERN’s long-standing leadership in particle physics and the successful planning and running of large-scale scientific endeavours.

For Europe to become and remain a world leader, it is essential to have available a large body of highly educated and experienced S&T personnel with access to sophisticated and technologically advanced facilities and infrastructures. RI-PATHS will recommend a set of concrete actions to be taken at the European and Member States level as well as to the broader community of researchers designing and using future RIs. A novel and robust monitoring and evaluation system for RIs will contribute towards greater European competitiveness, employment, and prosperity.

How fundamental science is changing our world Education for innovation in Hilumi and FCC

What’s in it for innovators in Hilumi and FCC? Twenty young researchers interested in innovation and entrepreneurship participated in this two-day course. 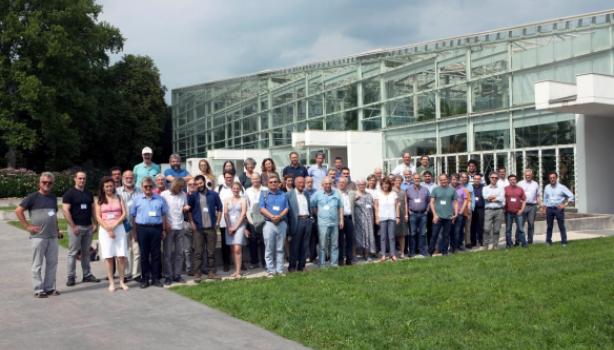 Discussing status and ongoing efforts in light of the upcoming European Strategy update.