On 2-3 July 2018 a muon collider workshop at the University of Padua attracted 78 experts from Europe and the US, as illustrated in Figs.1 and 2. This workshop was the second event organized in the frame of ARIES Work Package 6.6, following the Photon Beams Workshop in November 2017.

Setting the stage, Carlo Rubbia, from CERN and INFN, the recipient of the 1984 Nobel Prize for Physics, called for an initial cooling experiment to demonstrate muon cooling and the merits of parametric ionization cooling. He pointed out that the facility would comprise a ring at the scale of the PS, and hinted at the ESS being the ideal place for a muon-beam facility in Europe. Recognizing the muon colliders as a project of reasonable cost and reasonably fast, he admonished the audience to pursue scientific work instead of “PowerPoint studies”.

BNL’s Mark Palmer summarized the results of the US MAP studies. In particular he described the design of the facilities NuSTORM, and NuMAX, which are short and long baseline options, respectively, with enormous capabilities for precision physics. A multi-TeV muon collider would fit on the FNAL site, and he also discussed alternative options for a muon collider in the LHC tunnel. The MAP study had considered 10 T dipoles, or about 1000 turns decay time. Similar to the first speaker, Mark’s recommended strategy was to build NuSTORM and pursue a cooling demonstration. The full physics performance and achievable resolution need to be analyzed.  The preferred scenarios is a programme which culminates in a muon collider and which does exciting science all along the way.

A general consensus was reached that the steps forward should include the design and implementation of a 6D cooling experiment, and the establishment of a particle-physics programme based on high-intensity, high-energy muon beam, e.g. NuSTORM, presented by Jaroslav Pasternak, also from Imperial College.

Scott Berg of BNL pointed out that the matching problem for multiple cooling cells ought to be addressed.

In addition to the classical based muon production approach where high-intensity proton beams are shot on a target for pion generation, three alternative schemes are recently being explored, under the names “Gamma Factory”, “muon photocathode” and “LEMMA”.

Witek Krasny, from LPNHE Paris and CERN, introduced the “Gamma Factory,” where partially stripped heavy ion beams at high energy are collided with laser or FEL pulse. He highlighted three specific scenarios for producing polarized leptons (muons or positrons) using the Gamma Factory concept, and the associated ongoing SPS experiments. A breakthrough scheme with Pb+79 ions avoids the double excitation of electrons into the continuum.

Camilla Curatolo, from INFN Padova discussed a “muon photocathode”, which could be realized in Hadron Photon Collisions using an FEL. To study such a scheme she developed a dedicated event generator. For an FCC-based example, the normalized emittance would be less than 1 micron. The proton-gamma luminosity could be 1038/cm2/s. Muon accumulation and muon polarization are to be considered.

Manuela Boscolo from INFN Frascati presented the LEMMA scheme, where 45 GeV positrons circulating in a storage ring annihilate on a thin internal target, resulting in muon production. The positron beams lose several tens of MW energy passing through the target, made e.g. from beryllium, carbon, or hydrogen. About 200 kW of this power is deposited inside the target. Target survival is an open question. Liquid targets or rotating targets are among the options proposed. The workshop participants agreed on the need for experimental target tests.

Oscar Blanco from INFN-LNF reported on the muon accumulator ring. He pointed out that the muon beam emittance is limited by multiple scattering in the annihilation target. Citing Daniel Schulte of CERN, he also showed that for a 3 mm Be target the minimum normalized emittance is 600 nm, significantly larger than the 40 nm emittance previously assumed.

Simone Liuzzo of ESRF explained that, for LEMMA, more than 120 MW of synchrotron radiation are emitted in a 6.2 km positron ring. For a 27 km ring the synchrotron-radiation power drops below 30 MW. Frank Zimmermann of CERN highlighted that this power becomes even lower if the 100 km FCC-ee ring is employed, which serendipitously, thanks to its Z-pole running mode, already offers the right beam energy.

Intriguingly, Francesco Collamati, from INFN Roma, showed that the abundant bremsstrahlung photons which are equally emitted from the target can be used to generate more positrons, leading to a self-amplification of the positron beam, which could solve the challenge of generating positrons at the rate required for LEMMA.

Susanna Guiducci from INFN-LNF reviewed the state of the art in positron sources, which would be an integral part of LEMMA.

Daniel Schulte of CERN discussed the potential use for muon-collider R&D of an experimental programme using electron beams from the CERN SPS, with a CLIC like injector. He underlined that plasma acceleration is a perfect match for muons, which typically are of low intensity and fairly large emittance, arguing “if it is not suitable here, plasma acceleration probably cannot be used for any other type of collider”.

In an exceptional remote presentation of this workshop, David Neuffer of FNAL, presented the fascinating option of a 14 TeV muon collider in LHC tunnel, which could be a cost-effective approach for reaching the ten-TeV scale in lepton collisions. The proposal is illustrated in Fig. 3. Upon request, he also detailed the three laws of beam physics.

Daniel Kaplan of IIT reviewed limits from neutrino radiation. Concerning the next steps, he also recalled that “you don’t get tenure at Columbia University by saving government money”.

Frank Zimmermann, of CERN, sketched a possible upgrade of the FCC lepton and hadron-collider complex to a high-energy muon collider, using a combination of Gramma Factory and LEMMA concepts – Fig. 4. He showed that for various reasons and in view of the scaling laws – which call for ring of large circumference and with high magnetic field – the FCC is the ideal basis for a future 100 TeV muon collider.

Jean-Pierre Delahaye of CERN (retired) compared the performance of proposed future colliders, introducing two figures of merit, the luminosity per construction cost and the luminosity power electrical power. He showed that the FCC-ee was the best of all options, while the figures of the muon collider extended all across the figure-of-merit plane from the worst (muon Higgs factory) to the best (multi-TeV muon collider) – see Fig. 5.

Alain Blondel from the University of Geneva pointed out that luminosity measurement techniques for muon colliders need to be worked out.

Mario Greco from Roma Tre highlighted the importance of QED radiative eﬀects for a precision study of the Higgs pole line shape and the signal-to-background ration, both at a Higgs factory muon collider and at the FCC-ee.

At the end of the workshop, Nadia Pastrone, from INFN Torino, the coordinator the European muon collider study group, drew some enthusiastic conclusions and discussed the muon-collider input to the European Strategy Update. 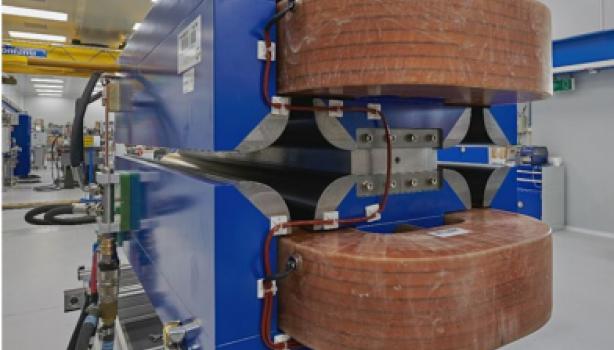