Non-perturbative measurements of low-intensity charged particle beams are particularly challenging to beam diagnostics due to the low amplitude of the induced electromagnetic fields. However, such measurements are essential to monitor the operation efficiency of Antiproton Decelerator machine and the future extra low energy antiproton rings.  A precise measurement of the beam intensity in the AD is essential to monitor any losses during the deceleration and cooling phases of the AD cycle, and to calibrate the absolute number of particles delivered to the experiments.

Traditional devices that are able to measure DC beams like the DC Current Transformer (DCCT) are limited in current resolution to ≥ 1 µA. The previously existing Schottky-noise based monitor was very inaccurate when measuring low-intensity DC beams, and intensity measurement using the bunched beam coherent components presented a strong bunch shape and length dependency. In addition, these can not be easily calibrated for an absolute measurement.

A new beam intensity diagnostic based on a Cryogenic Current Comparator (CCC) was developed for the Antiproton Decelerator (AD) machine, which was optimized in terms of its current resolution, system stability and ability to cope with short bunched beams, and immunity to mechanical vibrations. This project was developed in a collaboration between Friedrich Schiller University, University of Liverpool, GSI Helmholtz Centre for Heavy Ion Research and CERN.

The CCC working principle is based on the measurement of the magnetic ﬁeld induced by the particle beam to be measured. The magnetic ﬂux is concentrated in a high-permeability ferromagnetic pickup core from which it is coupled into the Superconducting Quantum Interference Device (SQUID) sensor via a superconducting ﬂux transformer circuit. A superconducting magnetic shield structure containing the pickup core with a meander structure renders the coupled magnetic ﬁeld nearly independent of the beam transverse position while also shielding the system against external magnetic ﬁeld perturbations. A schematic of the different components is shown below.

The main goal of this project was to demonstrate an operational and stable system that would achieve sub micro-Ampere resolution to be able to measure the coasting and bunched antiproton beams at CERN. Previous systems had already achieved comparable and even superior resolutions of the order of 1nA, however, these were obtained in a laboratory environment and would suffer from significant perturbations from mechanical or EMI noise when installed in an actual accelerator. These could hence not be continuously used during standard machine operation.

The immunity to mechanical vibrations was accomplished by the delicate and careful design of a new cryostat to house the CCC monitor. This was entirely designed and fabricated at CERN by the Cryogenic Group in the Technology department and the Mechanical and Materials group in the Engineering Department. The geometry of the of the cold-mass support system inside was optimized for reducing the vibration transmission, while at the same time minimizing the heat in-leak to allow for a stand-alone operation with cooling power entirely provided by a cryocooler.

The CCC monitor with complete acquisition system was installed in the AD, and has been able to consistently provide a beam current measurement with resolutions down to 2 to 5 nano amperes. Which is equivalent to a beam intensity resolution of 1 to 2.5 x 104 charges at the revolution frequency during injection, and one order of magnitude worse at ejection. This is the ﬁrst operational CCC system able to measure the average current of both bunched and coasting beams in a synchrotron accelerator with an extended autonomy. The cooling of the cryostat with the cryocooler still presents some limitations and after a liquid helium refill the system has been operational for periods of 3 to 5 months.

The performed measurements represent a considerable improvement over the previously available measurement, making the CCC an important tool for reducing the beam commissioning time, reducing troubleshooting times, and ultimately increasing machine eﬃciency. During the past two year, the monitor has been available for extended periods and the provided intensity measurement has been routinely used by the AD operations team. Another particular improvement is the possibility of absolute calibration of the experiments receiving the particle beam using data from the CCC, as well as cross-calibration of other intensity monitors. Currently going on projects expect to develop and install several CCC monitors in the low-energy Cryring at GSI and several other ones in the FAIR facility.

A paper reporting the initial beam measurements performed with the new CCC in the AD with title “Non-perturbative measurement of low-intensity charged particle beams” was published last year in the Superconductor Science and Technology IOP journal, and has been selected for the journal highlights of that year in the category of Large-Scale Applications together with other 8 papers. Building on the community’s collective experience on accelerator communication

Members from the accelerator communication community gathered at CERN for the 2nd Accelerator Communication and Outreach workshop. 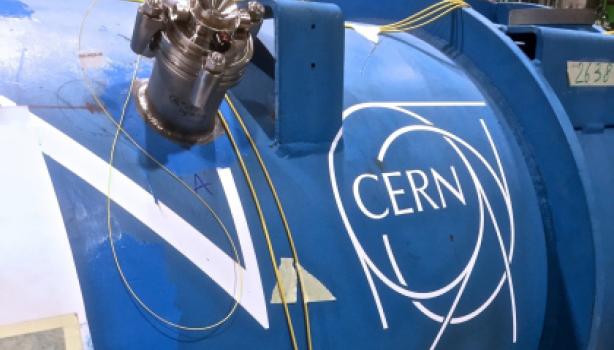